Do you love the fresh new covers of our bestsellers The Book of Myself and The Book of Us as much as we do? Both guided journals, with new designs – inside and out – as well as updated content are ready to ship on September 10, in plenty of time for the holiday season.

Many people give The Book of Myself: A Do-it-Yourself Autobiography in 201 Questions to their parents or grandparents to encourage the older generations to write down their life stories to pass on to future generations.

And The Book of Us: A Journal of Your Love Story in 150 Questions is just right for couples, either new or longstanding, to celebrate their relationship.

“Storytelling is one way couples bond when a relationship is young. But between long-term partners, the conversation often becomes mundane. Psychologists say it is important to keep telling and listening to each other’s stories,” according to a 7/4/2016 Wall Street Journal article by Elizabeth Bernstein.

So true. Also true – your stories can be told aloud or in a guided journal: What I Love About You and The Book of Us for love stories and appreciation; or Picture of Me and The Book of Myself for stories about you that maybe you’ve never told.

Wall Street Journal article: Why Good Storytellers are Happier in Life and in Love

The Chicago Tribune just printed an article called “Heirlooms are Not Treasures to the Young,” saying that the long tradition of passing down family heirlooms may be coming to an end.

Julie Hall, a North Carolina liquidation appraiser, says “Over the next 15 years, the estate sale market will be flooded with silver flatware, china and heavy, dark furniture that will quickly depreciate in value.” Baby boomers’ children don’t want this stuff, even if their elders consider them family heirlooms. “The kids don’t want 3,000 square feet of dark, heavy furniture because they can’t fit it into their 1,000-square-foot home.” And they don’t want to polish silverware, or deal with china that can’t be thrown into the microwave or dishwasher.

A study by the investment firm U.S. Trust found that “fewer than half of wealthy boomers say leaving their children a monetary inheritance is a priority. One in 4 said they were concerned that money would make their children lazy, and 1 in 5 said their children would probably just waste it.”

So if china/silver/crystal/furniture are not treasures to the young, and boomers don’t want to shower them with money, what does make a valuable heirloom to pass down to the next generation? According to a study by Allianz Life Insurance Co., “86 percent of boomers said inheriting family stories and traditions is more important than inheriting money.”

That’s where Marshall Books comes in! These two journals, when filled with the stories of their family elders, make especially good gifts to the next generation:

The Book of Myself: A Do-it-Yourself Autobiography in 201 Questions

The Book of Us: A Journal of Your Love Story in 150 Questions 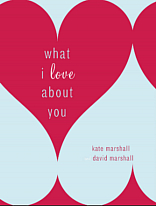 Gary Chapman, author of bestselling book The Five Languages of Love, writes that “the need to feel loved by one’s spouse is at the heart of all marital desires.” He explains that when one person invests energy in filling his or her partner’s “emotional love tank,” the other person naturally reciprocates and that this sets the course for a long-lasting, loving relationship. According to Chapman, Love Language #1 is “Words of Affirmation…best expressed as simple, straightforward statements of affirmation.”

John Izzo, PhD, author of The Five Secrets You Must Discover Before You Die, claims that the secret to a happy marriage is sincere, loving affirmations. He sites a study that claims that couples who express seven positive affirmations for every one negative criticism of each other have longer lasting marriages than those who do not.

Do you agree? Of course, staying loving and positive is not always easy to do. Sometimes we lose it – nobody’s perfect. But when one of us is mindful enough to change the channel and sing each other’s praises it feels indescribably good. That’s what our two couples’ journals – The Book of Us: A Journal of Your Love Story in 150 Questions and What I Love About You – are all about. The writing prompts and fill-in-the-blank format help you find the words to affirm your partner in a way that can be read over and over.

Post-Valentine’s Day reviews – from people who got or gave one of our couples journals for VDay – are popping up on Amazon now. These reviews convince me that we’re on the right track with these journals. It makes me happy that they’re making a difference in people’s relationships.

We knew it all the time….

I just re-read a July 1, 2007 issue of the Bottom Line Personal article that should warm the hearts of writers in relationships everywhere:

James W. Pennebaker, PhD, professor and chair, department of psychology, University of Texas at Austin and leader of a study of 86 dating couples, reported in Psychological Science.”

Two easy ways to write about your sweetie:

– What I Love About You